Amazon Web Services offers a world of cloud services that give us the ability to move our workflow into a third-party physically managed infrastructure. In this article, I intend to show how we can adapt and automate the simple use case of continuous deploying a serverless application, such as a REST API with NodeJS, exclusively using AWS services.

This article has also been published in Medium. 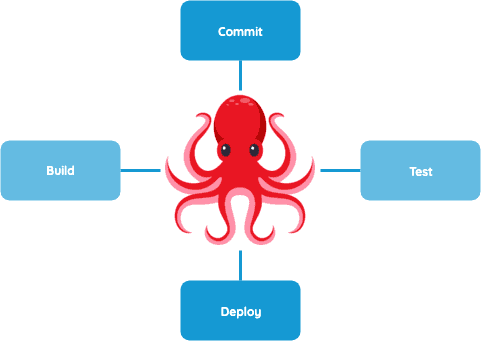 Let’s say you have an application in, for example, NodeJS — you can be using AWS Lambda and possibly connected to AWS API Gateway. If you haven’t yet automated this process (externally), you probably look like the octopus above, sharing your pre-release efforts into each one of the tasks. At certain point, you ask yourself, how can I bring the most recent release into staging/production rather than manually building or deploying it?

If we’re talking about Continuous Delivery, CodePipeline is your friend! It automates building, testing and deployment phases of your process every time there is a change. In this story, we intend to prepare the pipeline with the following three stages: Source, Build and Deployment:

Since we're using AWS services, we might as well keep everything centralized here. The first step is to start our git repository which can be done using Amazon CodeCommit, Amazon S3 or an external source, such as Github. For the current purpose, we will start one using CodeCommit. If you have more than one source, both repositories should be created in this stage.

For the purpose, we created a demo NodeJS application which you can copy the code from.

Just create a new directory with this file inside and setup a new git repository with the following commands.

Note: You should be able to find the clone url in the top right corner of your repository. After clicking clone HTTPs.

The next step is build. We will instruct CodeBuild to package our artifacts into a compressed file uploaded on an S3 bucket. The next step will pick it up and deploy. To start, create a new build project. 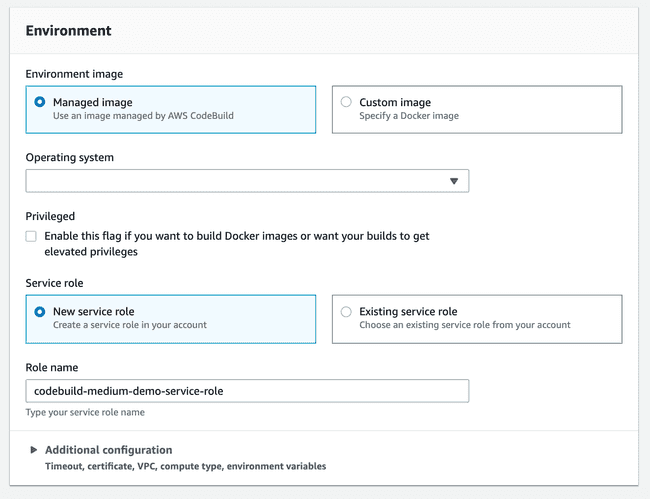 Before moving on to Artifacts, it is important that you have already created a S3 bucket to store the bundles. If you haven’t, just open a new tab and do it before proceeding. Afterwards, you should specify its name as below indicated. 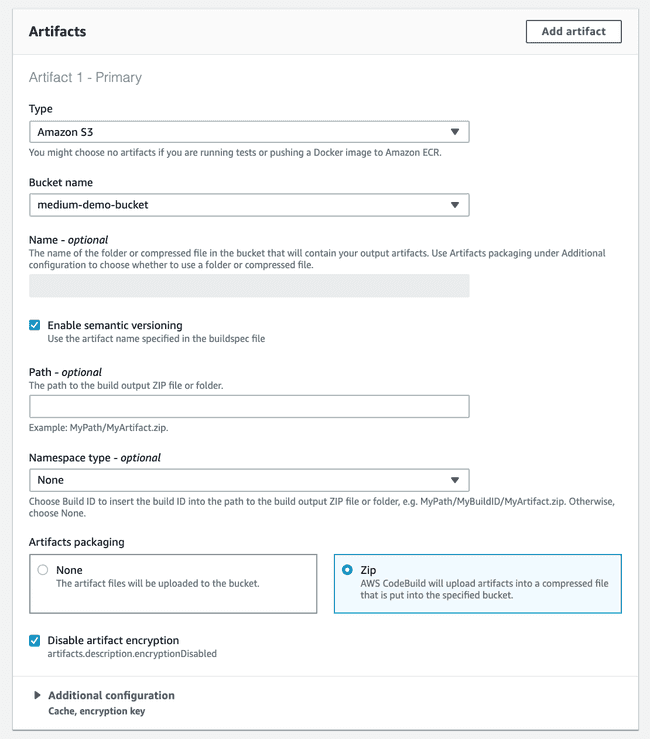 Reaching the Buildspec section, this is where we specify what CodeBuild actually needs to do to our source files. It is comparable to Jenkinsfile steps or Gitlab’s .gitlab-ci.yml file, if you are familiarized with them.

This file needs to be checked in the repository, and we’ll instruct CodeBuild to pick it up by giving its path.

Having a build stage ready to output our artifact(s), the next stage is to prepare their deployment. Now here’s the tricky part.

This problem was reported on the AWS forums.

The next step can save you hours of trouble. As an alternative, we will use CloudFormation (through AWS Serverless Application Model — SAM) to deploy the application. SAM is a CloudFormation extension that allows the definition of serverless applications in a simple and clean syntax. Essentially, it can be seen as an abstraction of existing CloudFormation resources.

Back to the stage logic; in sum, our template requirements include the definition of a resource that receives a build bundle as input and creates a new lambda function with it. The ideal use case for this function would be:

The following SAM template defines this type of resource. To achieve the first item, we declared AutoPublishAlias as true, which handles the new version generation associated with a specific alias. For the second, you may choose the type of deployment preference that most suits your use case. In the following example, we are shifting traffic AllAtOnce.

Guess what? This file also needs to be checked in.

Finally, after creating each stage individually, we have all the dependencies required to start creating a new pipeline.

The last step, Deployment, will divide into two actions. Since the “getting started” dialog is a bit limited, let’s skip it and generate the pipeline as-is. Afterwards, you can edit the recently created pipeline and add a new stage. The first action group will contain an action for Creating and replacing a change set.

Note: Parameter overrides field should be a single line JSON without any spaces. It specifies the bucket location where the built artifact from the previous stage is.

One of the fields will ask you for a role name. This role is what indicates which permissions are given for CloudFormation to summon and create a new change set to deploy your function. You will have to create a new role with the following properties:

After creating, you should add a new inline policy with the following JSON:

Moving on to the second action group, it should be an action to Execute a changeset:

CodePipeline is complex to setup. It took us a few weeks and AWS support calls to actually reach a stage where we weren’t updating it anymore. Before using such service, we were confident that keeping our development operations in an AWS managed fashion would ease our life.

After about 6 months, when I’m finishing this story, we’re no longer using CodePipeline. But, surprisingly, the reason we transitioned wasn’t because it was different or complex, it was because we needed to do cross-account deployments into different regions. AWS allows you to do deployments to a different account using this service, but, in the same region. Consequently, this was the time we realized that external operations would do deployments anywhere without any limitation.

We hope that this story serves as a guide for future companies or individuals considering to have their operations AWS-based. In my personal opinion, I would recommend it mainly for small to medium projects. However, if you’re in to try it out, there’s only one way to find out, and that will probably include going back to the top of the story!

Thank you for reading.

Let me know on Twitter or suggest an improvement on Github.